Barnhaven’s hallmark is a triad of color, lilting grace, with overtones of fragrance. - Florence Bellis, Gardening and Beyond, 1986

Barnhaven has been breeding and selecting since the 1930s through four different owners. It all started with a few packets of primrose seeds bought almost by chance by a lady with a vision in Oregon in the United States. Thirty years later an established company crossed the Atlantic to the Lake District in England and then the English Channel where it settled in a small village in Brittany, France. It is a singular story whose common thread is one of a passion for primroses passed on through the various owners who have caught the bug after being introduced to this amazing family of flowers.

Each of the owners has of course had their own vision and interests, but with over 400 species and thousands of varieties there is something for everyone. Yet what each subsequent owner has endeavoured to do is to continue Florence Bellis’s dream of pure colour and perfect form. Each of them has taken up the challenge with plenty of enthusiasm and patience and has believed in the importance of staying true to the first new lines produced by the company’s founder while at the same time introducing new strains and colours.

Florence Hurtig was born in New Orleans in 1906 but later moved with her family to Oregon where her mother kept a market garden. She trained as a pianist, but the Depression of 1929 prevented her from following that career and she ended up stuck without work or money and her health deteriorating. She then decided to move with her husband Lou Levy to a leaky old barn belonging to a wealthy acquaintance. Here she describes the first time she saw it: “It was nothing to look at with its ochre-coloured paint faded into the wood, but circumstances made it the most beautiful thing in the world. It was a haven and when I crossed the creek and stepped into the lane leading to it, I had a strange feeling of destiny.” It was to become the setting for Barnhaven gardens. 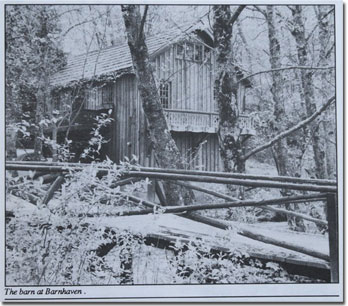 As the story goes, Florence decided to spend her last $5 on a few packets of Sutton’s seeds she had seen sometime earlier in the English catalogue of a friend. She had no previous knowledge about growing primroses but with luck on her side she sowed the following spring and germination was excellent. She planted out the seedlings under the alders along the creek at the back of the barn. A year later over a thousand plants bloomed – the whites and yellows of the Munstead strain and the reds of Suttons ‘Brilliance and Crimson King’. Word got round about her garden, visitors began to arrive and she started to grow plants for sale. She also started sending out hand painted mailing lists. The lyrical style of the first catalogue (she even forgot to put prices in) was to become a trademark for Barnhaven. Her interest in primroses growing, she researched the subject at Oregon State University and published a resulting series of articles in the Oregon Journal. This led to the founding of the American Primrose Society in 1941, and she became Editor of the Society Journal for the following 9 years. (Barnhaven still has very strong links with the American Primrose Society).

Simultaneously she developed her plant propagation and sales business as Barnhaven. Florence hand pollinated her flowers by emasculating her plants - a method not often used on a commercial scale before but which meant she did not have to use brushes or sterilize. Her method is still used in exactly the same way today. 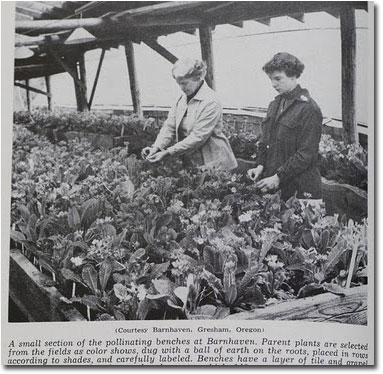 In the first batch of seedlings from Suttons seeds appeared a ‘Chinese red Polyanthus’ with a small gold star centre and an almost black stem. It was named ‘Kwan Yin’ as its elegance of form and grace suggested ‘China’s goddess of mercy’. Its pollen was used to produce several of the strains of Polyanthus. With rigorous selection and hand pollination she created many other strains such as her ‘Marine blues’. These strains became known as the silver dollar Primroses because the size of each flower equalled or exceeded that of the then dollar coin. The only other outside blood used was from Linda Eickman pink polyanthus which were bred over ten years into the ‘New Pinks’ strain and from the famous Cowichan strain offered for the first time as plants and seeds in 1949. These originated in the small community in Cowichan station near Victoria. Florence managed to obtain some pollen and introduced a range of hardy Cowichans. She also did a lot of work on anomalous primroses, juliea hybrids, gold-laced polyanthus and the doubles.

Florence’s first marriage ended in divorce in the mid-50s but she met Bob Bellis and married him in 1959. When Bob died in 1966 she was devastated and decided she could no longer run the nursery and sent her stock of seeds to Jared and Sylvia Sinclair in Brigsteer. When Florence decided to withdraw from the business the fame of Barnhaven was world-wide but Florence had made very little money from running the nursery so she was obliged to work in a small health-food store for as long as she was able. She died peacefully in her sleep in 1987.

Florence Bellis sent her seed stock to the Sinclairs in 1966 with a simple message of 'Yours – to keep or kill'. She would have destroyed the stock rather than allow the commercial seed companies to have them. She wanted to return the stock to England, where they had originated and chose the Sinclairs to carry on the work. 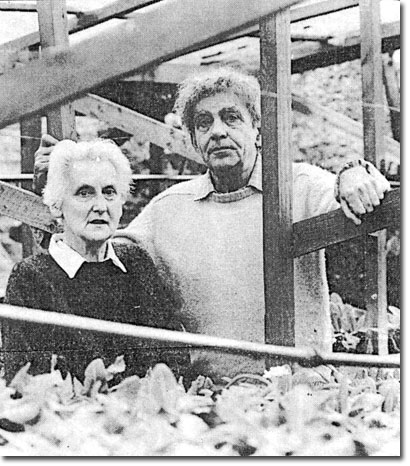 For the Sinclairs, former customers, this was an unexpected turn of events. They had previously mainly grown cut flowers for the local floristry market, but Sylvia had a horticultural degree, and both she and Jared fell to the task with enthusiasm. Working from their nursery in Brigsteer in the northwest of England, the Sinclairs made hurried changes such as erecting a pollinating shed and planting more trees for shade. They carried on the tradition of pollinating carefully selected open-ground plants, lifted and planted in pollinating sheds open on all sides to the elements. When the pollinating season was over the plants were put back in the open ground to ripen the seed pods for July harvesting. This process however became too time-consuming and they started keeping pots on benches for the whole of the season.

Gradually they built a reputation for quality in gardening circles. As well as maintaining Florence Bellis's original lines, they introduced many of their own new strains. These included Ramona, Rustic Reds, Mexico, Reverie, Flamingo, Paris 90, Midnight, Daybreak, Limelight, Fuchsia Victorians, Harbour Lights, Valentine Victorians, Yellow Cowichans, and Casquet. They worked extensively on the double auriculas, and practically restarted the single auriculas and the julianas from scratch. Their greatest achievement was the new strain of primula sieboldii which remained Jared's favourite.

Their catalogues were loved and enjoyed by all, notably because of Jared’s very colourful prose.

They announced their retirement in 1990 to the dismay of their wide circle of gardening friends, customers and admirers. Sadly, Sylvia died in 1996 and Jared in July 1998. 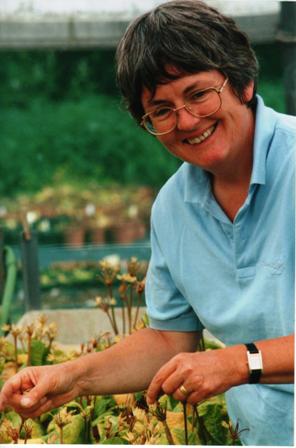 Angela's parents moved to Brigsteer, and as a result of her own gardening hobby, her interest in old fashioned flowers and their location, she came to know the Sinclairs. Over a period, they introduced her to the intricacies of Primula and Polyanthus breeding, and when they decided to retire, they passed the business to her. Angela, at the time a professional librarian, and her husband Keith spent some time looking for a suitable location in England to carry on the business, but eventually after a holiday in France they found the location which most suited them near the village of Plouzélambre in Brittany. The house was a typical farmhouse four miles from the sea with sufficient land and a source of water to start a horticultural business. They moved there in January 1990 and the first seeds were sown in March 1990.

Angela successfully continued to produce primula seed of the highest quality while developing the breeding programme for another ten years. As well as maintaining many of the original lines that Florence Bellis and the Jared’s introduced she worked extensively on the double primroses and a new Gilded Ginger strain. Keeping up with the times Barnhaven was also successfully launched on the web and Angela produced The Barnhaven Book (currently out of print).  In 2000, due to health reasons she reluctantly had to step down.

We met Angela and Keith when we first moved over to France in 1991 as we happened to buy a house in the same village. We started helping out at the nursery, and for several years were pollinating, potting, sowing etc and gradually became hooked. When Angela asked us to take over the reins in the summer of 2000 we were thrilled if somewhat daunted at the task. We moved the nursery to a new site just a few kilometres away at Keranguiner, Plestin-les-grèves. 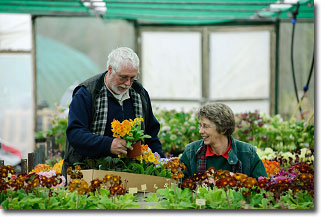 We continue to rigorously select and hand pollinate the plants in the manner of our predecessors to maintain the pure lines and to introduce new strains. We operate from a nursery which has three shade tunnels and two plastic covered tunnels which are open at the sides with extra shade netting overhead so the plants are not too hot and get plenty of ventilation. This means they are in almost outdoor conditions but we can pollinate/divide easily (without getting us or the seed pods wet).

Early on David caught the auricula bug and gradually introduced a show auricula collection to Barnhaven. He enjoys expanding the collection and sharing his passion for these extraordinary flowers. He is well known at the French flower shows for his funny accent, his unusual hat and beautiful displays.

Lynne has taken on the breeding programme and has produced hundreds of exciting new double primroses and new strains such as Tango, while at the same time maintaining the original Barnhaven gene pool.

Over the last 15 years we have considerably increased our plant sales both in France and worldwide and are now present at most of the major French flower shows at which we have won several prizes. Sometimes we feel that we are introducing France to the primrose in the same way as Florence Bellis did in America. At the shows we still often hear ‘So primroses aren’t all yellow…!’ and we are always delighted when clients come back for more the following year raving about how well they are doing in their garden.

And so it continues... 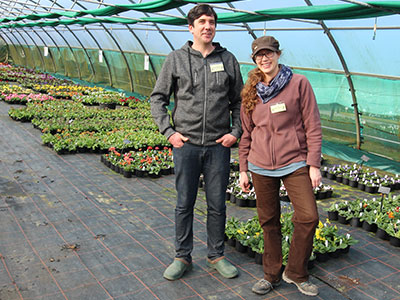 In the summer of 2011,our daughter Jodie, her husband Rob and two children upped sticks and arrived to help us with the growing workload in the nursery. They have brought two extra pairs of hands, new vision and ideas, and most important of all, share our dedication to maintaining the worldwide reputation of Barnhaven both now and in the future. David and I can begin gradually taking a lesser role, knowing that Barnhaven is in safe hands.